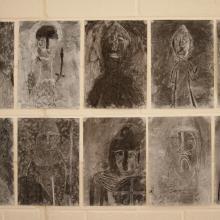 Attack on the bay animation by 5th and 6th class Danescastle National School.

This short film was made by 5th and 6th class Danescastle National School, Carrig on Bannow and is based on the arrival of The Normans in Bannow Bay, County Wexford, on 1 May 1169.  Each class were given four workshops and through these learned to draw in charcoal and to make monotype prints.

As the project evolved, the children reimagined the scene of The Normans landing in Bannow and created their own story.  It began with the character of Peigí, an elderly woman standing on the beach.  Mr Wickham posed as a fierce Norman knight and 5th class drew his portrait.

Each portrait was then used to form the Norman army, later in the animation.  Sixth class drew Ms Foley as a villager.  The soundtrack was recorded in the classroom and entirely improvised by both classes, including the sounds of birdsong, insects, horses, sheep, the voices of the villagers and the Normans.  The music was performed by three pupils and accompanied by the marching feet of 6th class.

The project was facilitated by David Begley and assisted by Hanneke van Ryswyk.

It was funded by Creative Ireland in association with The Arts Department, Wexford County Council.