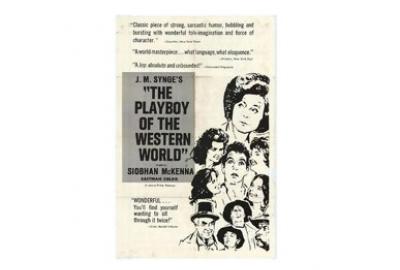 Week 1: Representations of Women in J.M. Synge's ‘The Playboy of the Western World’

Staged in 1907, one of the most famously controversial plays in Irish dramatic work is J.M. Synge’s The Playboy of the Western World . When Willie Fay, playing Christy Mahon, declared “It’s Pegeen I’m seeking only, and what’d I care if you brought me a drift of chosen females, standing in their shifts itself, maybe, from this place to the Eastern World” the Abbey audience expressed its indignation and outrage.

The suggestion that an Irish woman would parade in her underwear inviting and accepting sexual admiration was so outrageous and unacceptable that the production played the remainder of its run amid riots and controversy. Dr Kealy’s lecture considers Synge’s representation of Irish life and culture and, in particular, his representation of female characters that so enraged audiences of that time.

This is the first in a series of talks by Dr Kealy which will run under the general theme of ‘Portraits of Young Women in Irish Theatre’ throughout March.

Please phone Wexford Town Library on 053 9196760 to book a place. Should you require any supports to fully participate in this event, please contact the Librarian.