Read the national Decade of Centenaries Programme for 2022

Wexford County Council's commemorative plan for 2022 features a number of initiatives which support the in-depth exploration of the events from a century ago in Wexford.

Historian in Residence Programme
Our Historian-in-residence, Barry Lacey continues to collaborate with us. The residency provides a unique opportunity for Barry to conduct local research and to engage members of the public with the findings. During 2022 as the restrictions are lifted the residency will have a renewed focus on engagement with members of the community including older people and children and young people. Further walking tours and localised talks (in libraries and schools) will take place across the county. We will also post presentations by Barry in relation to the era on our social media platforms.

Public Lecture Programme:
Some themes that have been identified for 2022 public lecture programme (either in-person or online) include: 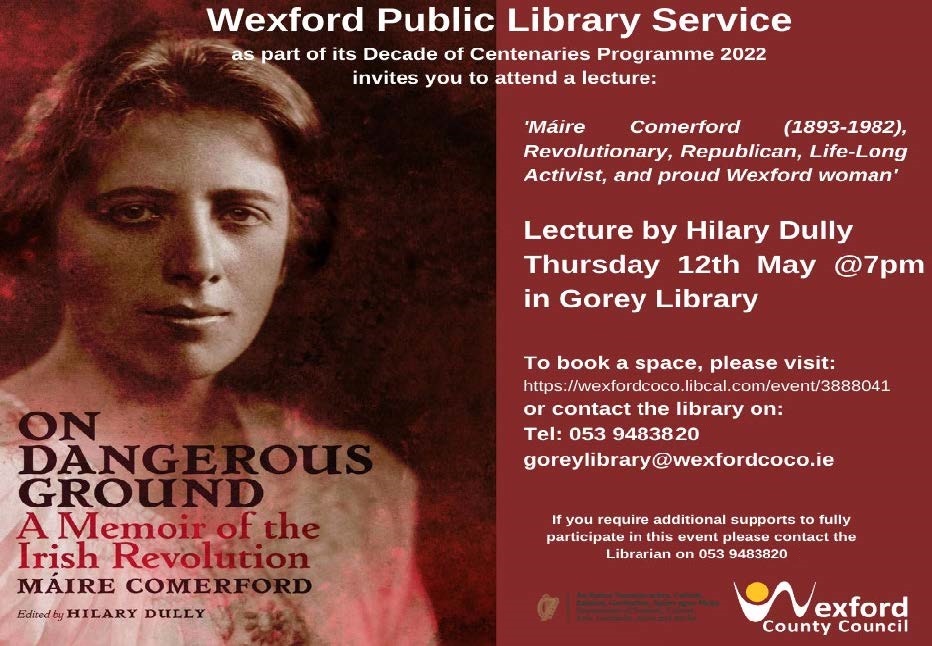 Social History Project:
This project will record family life in Wexford 1920 - 1925, a social history of the time as recorded in personal diaries. A profile of that time will be told through text, voice on podcast and image for exhibition.

Wexford Playwright Commission Award - Commemoration:
During 2022, the final part of phase one of this project will be completed. Extensive research will be undertaken by the playwright on the historical context of Wexford, linking with local community and with Wexford County Council Library and Archives Departments with their extensive digital archives of this period. This will lead to the development of a final script. Phase two will involve the playwright working with Wexford Arts Centre as producer and a local theatre group (professional or amateur) to stage this new theatre work which will tour locally and nationally in 2022 - 23.

Engagement with children and young people 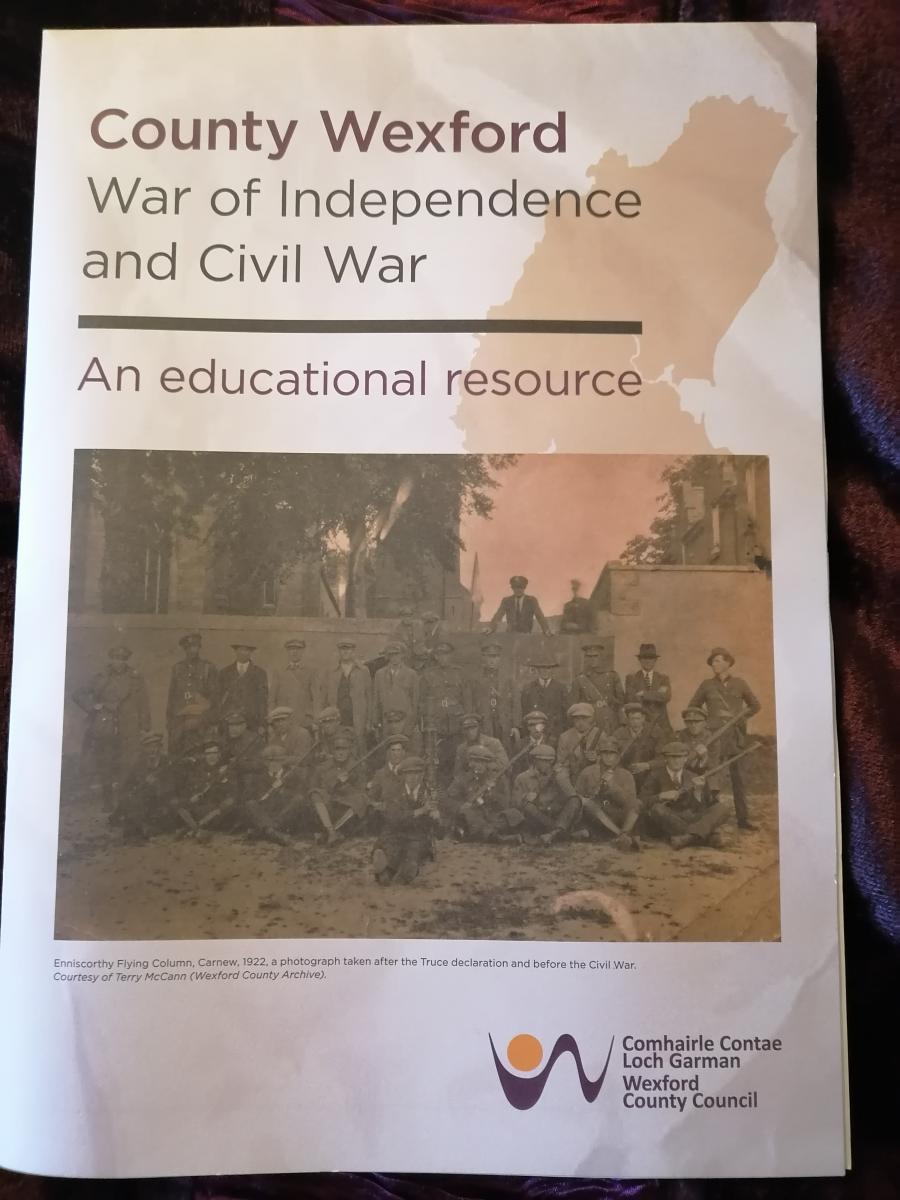 It is a resource for young people from 4th class to 3rd year. The booklet was researched and written by local historian, Monica Crofton and edited by Executive Librarian, Hazel Percival and Library Assistant, Michael Dempsey. It was designed by Nicola Bailey.

Our Historian-in-residence will visit schools in June and the Autumn to discuss the booklet with students. 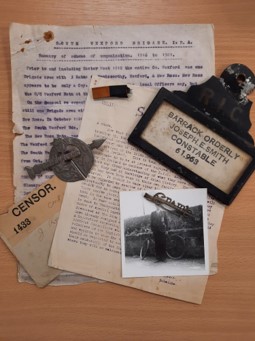 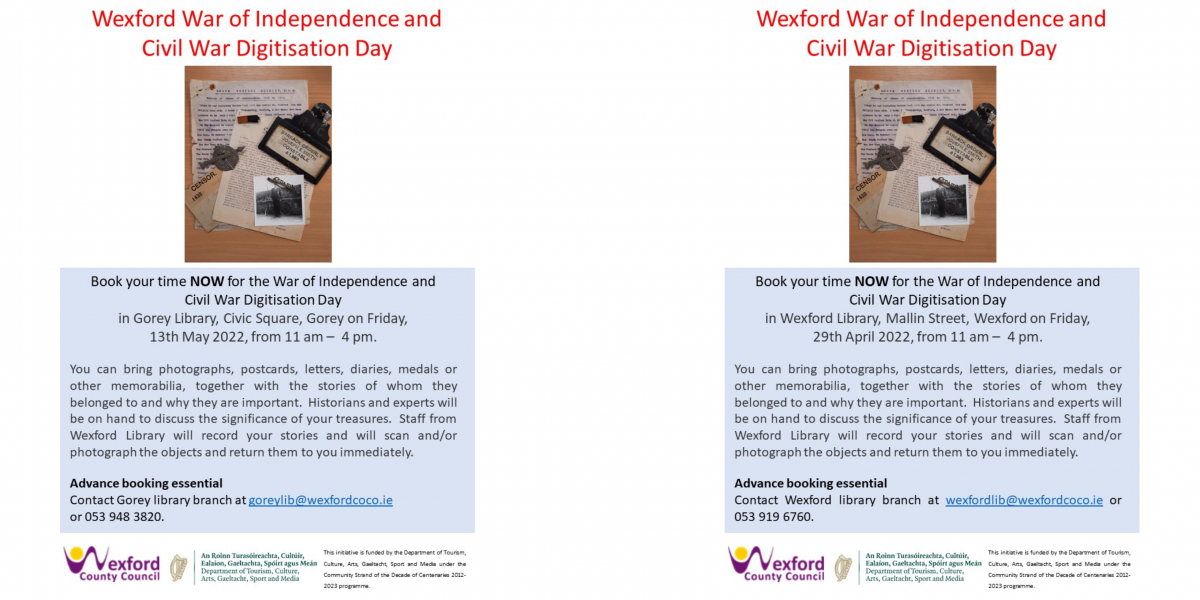 Members of the public were invited to bring photographs, postcards, letters, diaries, medals or other memorabilia in relation to this turbulent time in our history. Staff in Wexford Libraries recorded the story of whom they belonged to and why they were important. The objects were scanned or photographed. Historians and experts were also on hand to discuss the significance of these treasures.

An archive and exhibition will be created as a result of these open days, which will be available for future researchers and historians.

Digitisation and Online Exhibition of Wicklow Gaol Autograph Book:
Wicklow Gaol autograph book (1923) - the volume has been digitised and the project will translate into an online YouTube presentation of the volume with historical commentary, and a physical exhibition which will tour venues in Wexford and Wicklow.

Publication of The Archaeology of Conflict: Wexford in the Civil War 1922-1923:
Wexford County Council will publish its commissioned research on the Wexford Civil War recording project to assess the physical evidence and sites relating to the Civil War in Co. Wexford. This project which was conducted by Stafford McLoughlin has recorded the archaeological evidence of the conflict which happened in the county in the period from 1922-1923 using written sources and site inspections of impacted places. A public engagement campaign would highlight the findings of the research and ensure that the publication was widely publicised.

Inventory of Memorials to the War of Independence and the Civil War in County Wexford:
Wexford County Council wishes to conduct a study on memorialisation of the conflict of the War of Independence and Civil War in County Wexford. The commissioned study will map the memorials, their origins and significance in the memory of the conflict in the county.

Community funding will be available for local groups and local cultural and sporting institutions throughout County Wexford to play their part by developing a project to mark the centenary of historical events in their local area.

The funding will support local and community organisers to develop projects or events that commemorate the Decade of Centenaries: the War of Independence; the Civil War; labour unrest; social changes; cultural life in the 1920s; local responses to Dáil Éireann; the truce; partition; local connections with the wider world and new political representation at a local level. Funding can also be provided to allow advance planning of commemorative initiatives for 2023.

The terms of the scheme, Decade of Centenaries Grant Scheme 2022 Guidance document, are in accordance with the guidance of the Expert Advisory Group on Centenary Commemorations. All initiatives and activities funded from this scheme must adhere to the public health advice and guidance, laid out by the HSE and the Government, with regard to COVID-19.

The successful applicants were:

Read the national Decade of Centenaries Programme for 2021

County Wexford’s plans are featured on page 37 of the national programme.

Wexford County Council Decade of Centenaries Plan 2021
Wexford County Council Public Library and Archives Service offered a vibrant and exciting Decade of Centenaries Programme for 2021 which was approved by the Department of Tourism, Culture, Arts, Gaeltacht, Sport and Media. This plan was designed and adapted to fully comply with necessary Public Health restrictions imposed on the community due to the Coronavirus Pandemic. The project plan was adapted to enable online delivery and to increase public access to the digital collection for the revolutionary period of the War of Independence and the Civil War in County Wexford.

There were a number of strands to Wexford County Council’s Decade of Centenaries plans for 2021.

History Ireland Hedge School Podcast
History Ireland Hedge School podcast which discusses historical events in Wexford from 1916 to 1923. You can listen to History Ireland editor, Tommy Graham, in discussion with Bernard Browne, Ida Milne, William Murphy and Kevin Whelan. The panellists are eminent historians and have all published books in relation to this period in history. This podcast is available at Wexford Libraries YouTube channel, https://podcasts.apple.com/us/podcast/history-ireland/id1503109266 and https://www.historyireland.com/hedge-schools/ or wherever you get your podcasts.

Podcast on “Sport and War in County Wexford” by Paul Rouse 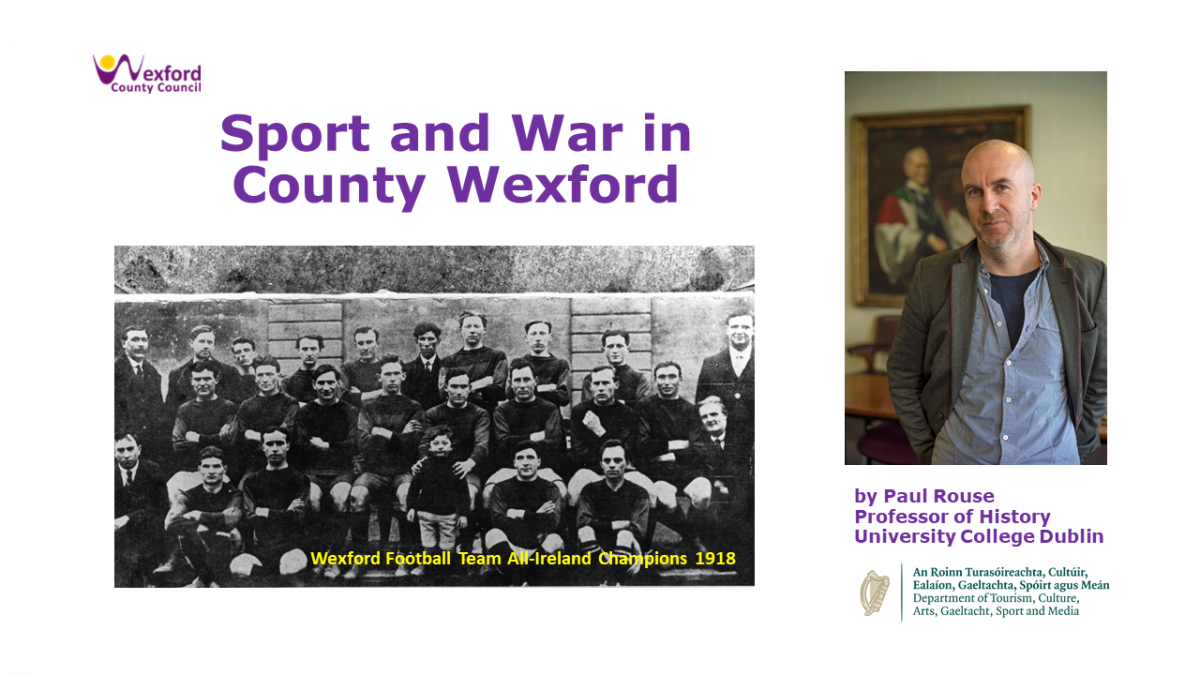 Wexford Libraries have enlisted Paul Rouse, Professor of History, University College Dublin to create a podcast on sport in County Wexford during this time. Paul has written extensively on the history of Irish sport and he writes a weekly column for the Irish Examiner. He is currently Co-Director of two major public history projects: Century Ireland (www.rte.ie/centuryireland), the main online portal for the Irish Decade of Commemorations, 1912-23; GAA Oral History Project (www.gaa.ie/the-gaa/oral-history/), the largest oral history project undertaken by any sporting organisation in the world.

This podcast is currently available on Wexford Libraries YouTube channel  “Sport and War in County Wexford” by Paul Rouse.

Video on “Wexford’s Civil War Dead” by Aaron Ó Maonaigh
Wexford Libraries have commissioned Aaron Ó Maonaigh to do an online video presentation in relation to fatalities in Wexford during the Civil War. Aaron Ó Maonaigh is a native of Dublin with familial ties to Enniscorthy, Co. Wexford. A graduate of Coláiste Phádraig (BA Hons) and Dublin City University (PME), he is currently employed by the Department of Education and Skills and teaches English and History at a post-primary school in Co. Dublin. He has previously published and presented on the subjects of Irish cultural identity and the politics of sport during the Irish Revolution (1912-1923), and the Civil War experience of Co. Wexford. His work has featured in publications by Routledge Press, Dictionary of Irish Biography, The Past: Organ of the Uí Cinsealaigh Society, and Cork University Press [forthcoming]. 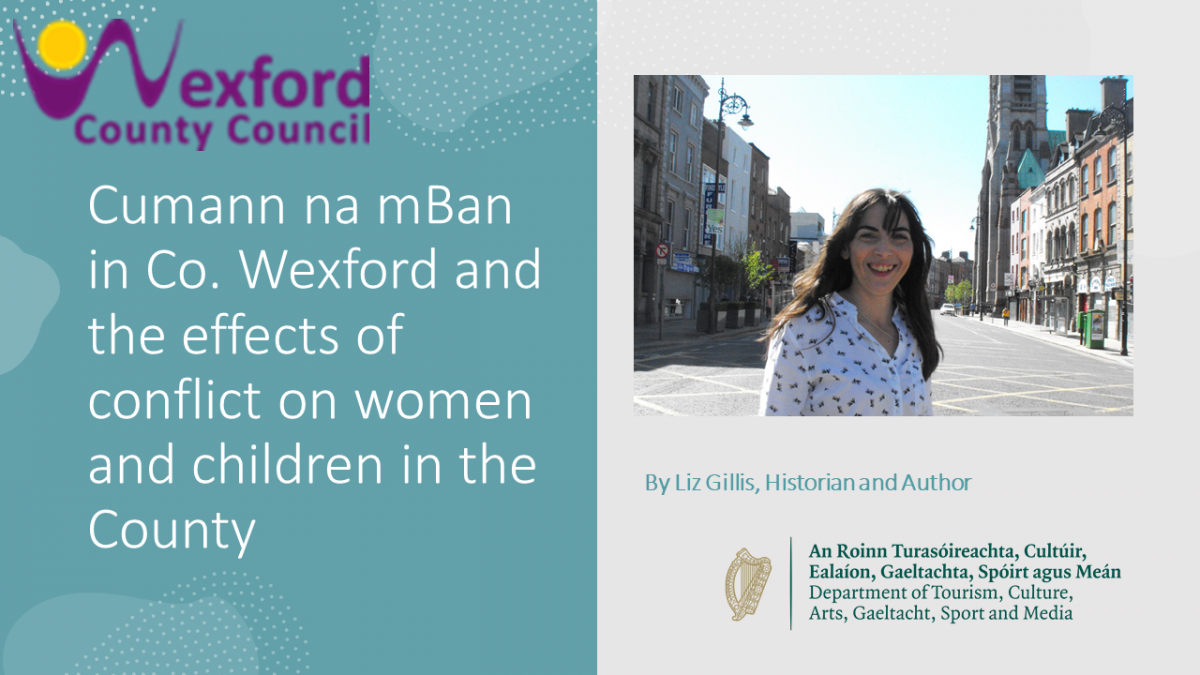 Video on “The Role of Cumann na mBan in Co. Wexford and the effects of conflict on women in the County” by Liz Gillis
Wexford Libraries have asked Liz Gillis to give us a glimpse of the experiences of women and children in County Wexford during the revolutionary period. Liz is a historian and author of "Women of the Irish Revolution" which tells the story of the role that women played both directly and indirectly in the Irish Revolution. She is currently Historian-in-residence at South Dublin Libraries. This online talk is brought to you via funding from the Department of Tourism, Culture, Arts, Gaeltacht, Sport and Media under the Community Strand of the Decade of Centenaries 2012-2023 programme.

This video is currently available on Wexford Public Libraries YouTube channel "Cumann na mBan in Co. Wexford and the effects of conflict on women and children in the County" by Liz Gillis 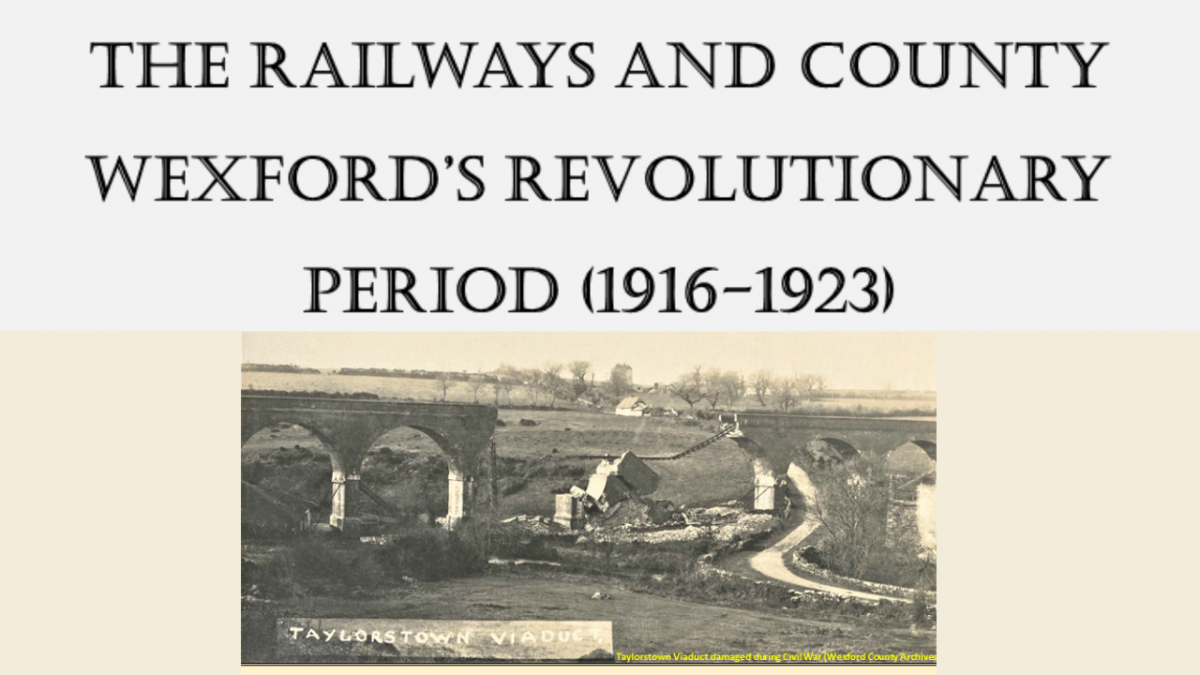 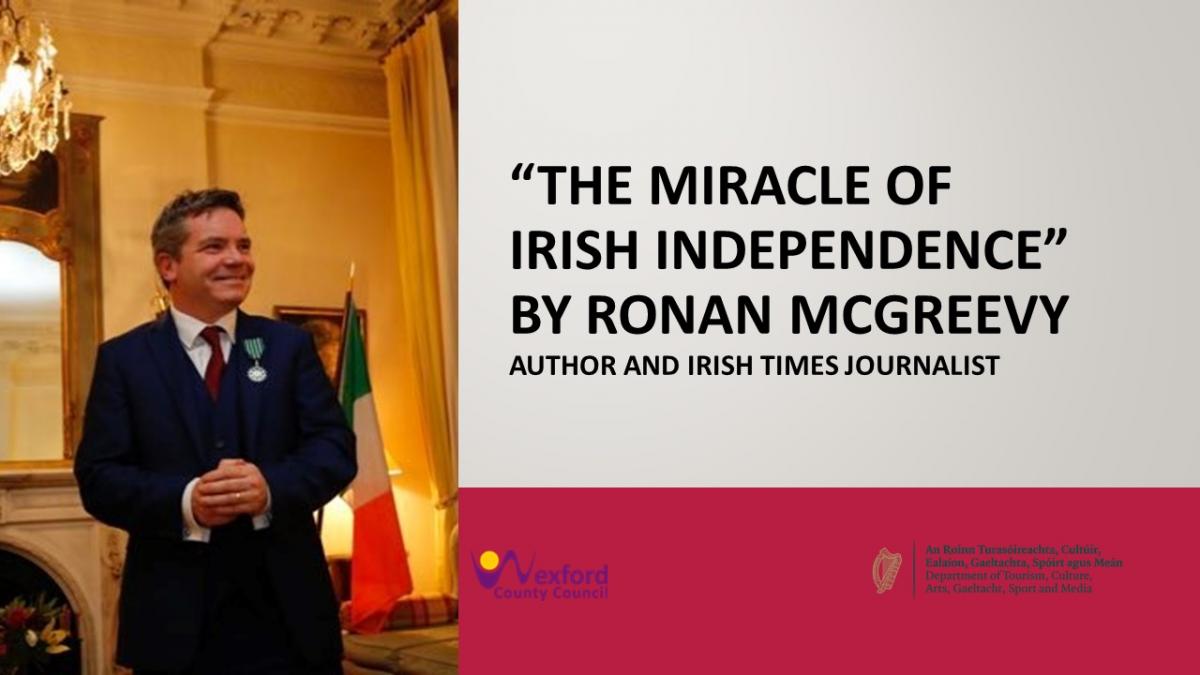 Video on “The Miracle of Irish Independence" by Ronan McGreevy
In this online talk, Ronan McGreevy discusses the centenary of the War of Independence and its legacy. Ronan McGreevy is an Irish Times journalist, the author of "Whatever the Firing Line Extends: Ireland and the Western Front" and the editor of "Centenary: Ireland Remembers 1916", the official State book recalling the commemorations of 2016. His latest book "Great Hatred: The Assassination of Field Marshal Sir Henry Wilson MP" will be published next year. Prior to joining The Irish Times in 2006, he wrote for The Times, The London Evening Standard and The Irish Post. He was also a radio and television producer with the BBC and Sky News. 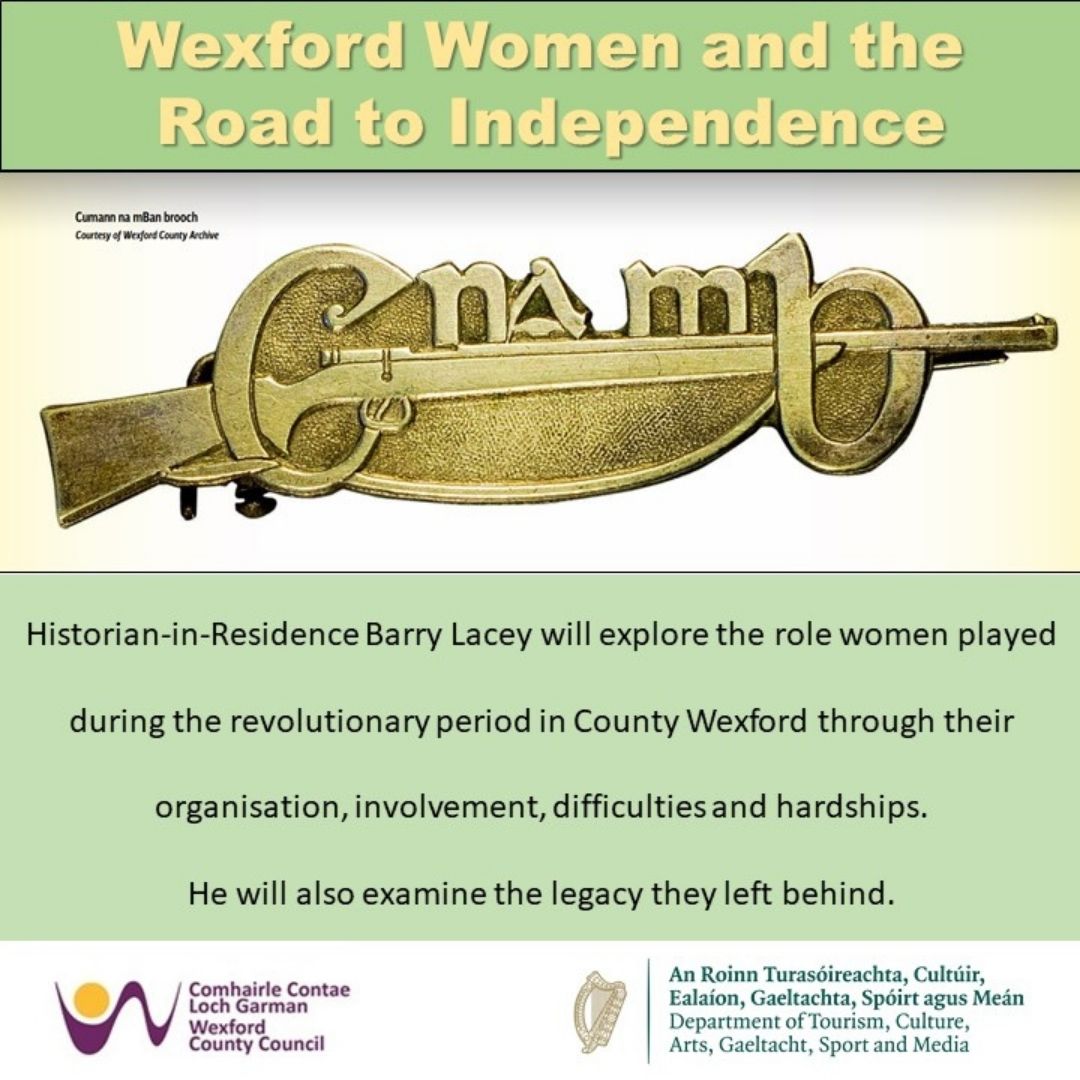 Video on “Wexford Women and the Road to Independence" by Historian-in-residence, Barry Lacey
Historian-in-residence, Barry Lacey will explore the role women played during the revolutionary period in County Wexford through their organisation, difficulties and hardships. He will also examine the legacy they left behind. Barry's residency is funded by the Department of Tourism, Culture, Arts, Gaeltacht, Sport and Media under the Community Strand of the Decade of Centenaries 2012-2023 programme.

Online presentation “Truce to Treaty" by Historian-in-residence, Barry Lacey
To commemorate the signing of the Anglo-Irish Treaty Historian in Residence Barry Lacey explored the Truce period in County Wexford from the end of the War of Independence, in July 1921, to the signing of the Treaty on the 6th of December that same year.

Public Digitisation Project
An open day was held on Friday, December 10th. This was for members of the public to present medals, correspondence, photos and stories of their family members to be digitised or deposited in the Archive. These memorabilia will then be available to view online in digital exhibition format.

Cataloguing the TD Sinnott Collection
This is a notable private collection in Wexford County Archive which will be digitised, and elements of the collection will be made available on the Archives website.

Digitisation of Archival Collections
The Diary of Seán Sinnott during his time in Spike Island, 1921 was digitised.

Online exhibition series entitled ‘Archives from the Past’
The War of Independence in County Wexford as reflected in the holdings of Wexford County Archive (this will include the local government response).

The 2021 plan will also include various projects at Municipal District level and a creative community-led initiative which was coordinated by Wexford County Council Arts Department.

All presentations were funded by the Department of Tourism, Culture, Arts, Gaeltacht, Sport and Media under the Decade of Centenaries 2012-2023 initiative.