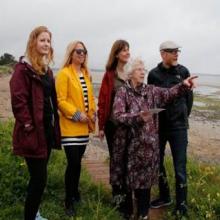 Wexford County Council, Fingal County Council and Dublin City Council came together and put out a call for artists interested in exploring this area of art and biodiversity to apply to be part of a new environmental residency programme entitled An Urgent Enquiry

These artists, for a few months, collaborated with each local authority and biodiversity specialists along Ireland’s east coast, creating an artistic response to the influences of climate change and its effects on the biodiversity.

This opportunity enabled him to reside for three months in Wexford to explore the biodiversity of each area and the effects of climate change, through research, interactions with environmental specialists, scientists and advisors, relating to the artists interest and engaging with local communities with support from the local authority Arts & Biodiversity Offices.

Each artist worked closely with Arts, Biodiversity and Environment departments in the local authority and linked to local experts and community groups.  Artistic outcomes of the residency was presented publicly in each local authority in Autumn 2019.

The project was funded through the Arts Council’s Invitation to Collaboration scheme which supports innovative, ambitious local authority collaborations.

Mark Clare was interested in the potential of science, philosophy and aesthetics to enrich his thinking on climate change issues to produce work that drew our attention to what was currently happening in our environment.  Using a solitary bee (Osmia aurulenta) found along the east coast as a metaphor, Mark explored environmental issues such as habitat loss, disturbance, insect decline, pollution and climate change.  Mark was also interested in highlighting the importance of Phytoplankton found in our oceans which produce over 40% of the world’s oxygen through photosynthesis and are the base of the marine web.  As an introduction to his residency in Wexford, Mark organised workshops with a marine biologist exploring the incredible contribution phytoplankton makes to life on earth as well as workshops in foraging.  He developed artwork over the summer in response to his research which he was presented back publicly in Wexford in Autumn 2019.
To view the video of the Urgent Enquiry Residency 2019 click here